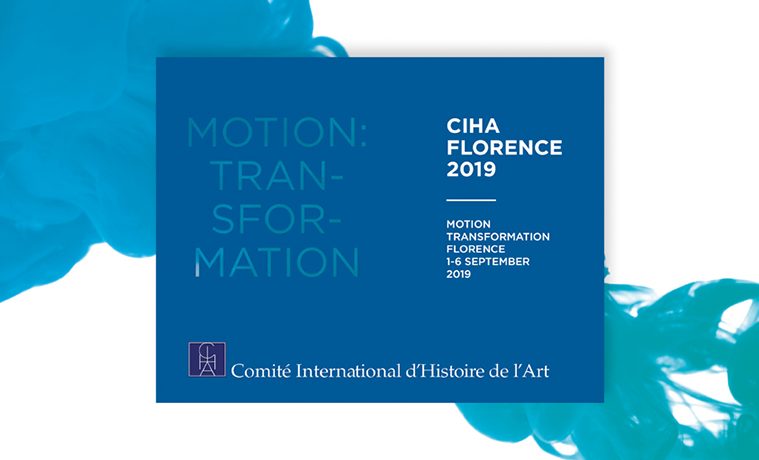 adminMarch 19, 2019
EventosNoticias0 Comments 0
The Florentine venue of the 35th CIHA congress proposes the title Motion: Transformationas an invitation to study the specific “life” of artworks, artifacts and images: animation, “lifelyness”, efficacy or “emanation” are phenomena that in many cultures, since prehistoric times, are linked to crafted objects, images or rites. Be it religious energy, magical qualities or aesthetic vivification, artifacts are produced, dwell and could be consumed in a great variety of attributed forms of agency. One figure the Florentine congress wants to rethink in this horizon is that of the artist or “maker”, seen in a transcultural perspective. We might refer to the myth of Daedalus, legendary creator of automata, or to Neo-platonic philosophy of late antiquity, according to which the animated simulacrum represents an inescapable element of the link between humans and the cosmos. In subsequent Christian thought, instead, such connections could contribute to the negative conception of the idol. This is only one example which shows the multiple constellations of objects and images in specific world views and cultural practices, often connected to astrology or political theologies. The combination of art historical and anthropological expertise could be a strong point of the congress, to better understand the position of the “animated” object in the formation and transformation of collective identities and in transcultural negotiations. In fact, the cross-cultural gaze can be a means to “vivify” the images and symbols of other cultures of the present or the past, even if often in negative terms as diabolic or inhabited by demons. On the other end of the scale is a discourse of art that attributes to works, images and created objects virtues which are due to a specific aesthetic quality of matter and shape. This can involve an appreciation of subtle crafting and ingenious vivification of representations from nature and the social world. The metamorphotic dimension of such artistic creation (making one matter appear in another) contributes to the celebration of a work as magical and animated but it is important in the congress to differentiate these various dimensions, even if they are shared by many cultures. The congress invites comparative approaches or explorations of dynamics of connectivity. In its broad chronological and geographical range it is specifically interested in epochal changes and the processes of globalization under colonial or postcolonial premises.
In the context of new production methods developed during the Industrial Revolution artistic practices were cast out, whereas the aura could shift from the work of art itself to the figure of the creator. One may even think of terms of social theories such as alienation and estrangement which in their negation evoke concepts of creative work. Already evident in early movements from Romanticism to Symbolism, this “metamorphosis” was pushed further by the twentieth century through the contributions from the anthropological perspective and psychoanalytic mythologies.
Based on the above topics and considerations, the Italian committee proposes to organize the congress into the following nine sessions:
1) The divine artist
2) Matter and materiality: from removal to re-enactment
3) Art and nature. Cultures of collecting
4) Art and religions
5) Sign and writing
6) The eye and the hand, from project to product
7) Artist, power, public
8) Artists, critics, and viewers
9) Voyage – Connecting session between Firenze 2019 and São Paulo 2020 in collaboration with the Brazilian scientific committee